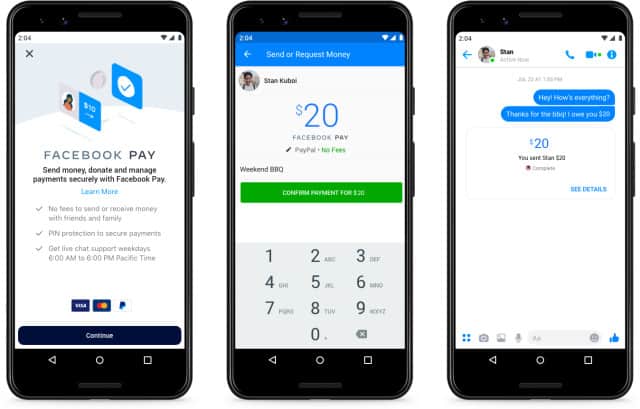 Introducing Facebook’s new payment system as Facebook Pay! This new system allows you to send money on Instagram, Messenger, WhatsApp and Facebook itself. It is processed by Stripe, PayPal, and others.

It was officially unveiled in the US, and the aim is to make payment easier on Facebook‘s social platform. Although, we still have no idea when it will be launch internationally or when it will arrive on WhatsApp and Instagram.

Users will be able to use Facebook Pay to send money to friends, shop for goods, or even donate to fundraisers. But this feature is definitely at a very disturbing time for the company.

Politicians are calling for the California-based internet company to be broken up. And it is also coming just weeks after huge payment system like PayPal and others has dropped out of Facebook’s Libra cryptocurrency project.

For starters, the Libra is a nonprofit organization that oversees the creation of the cryptocurrency and its rollout. It is due to launch next year, but it may never happen, since it is facing huge criticism and heated opposition from policymakers around the world.

Where regulators and governments sees it as a threat to their monetary sovereignty. Anyways, the company said that the Facebook Pay will be available on Messenger and Facebook in the US this week.

Users can easily access the Facebook Pay, as it’ll be available in the settings section of the Facebook or Messenger apps, and will support debit and credit cards and PayPal.

Facebook Pay on Messenger will initially be available for fundraisers, person-to-person payments, event tickets, in-game purchases, and some purchases from pages and businesses that operate on Facebook’s Marketplace.