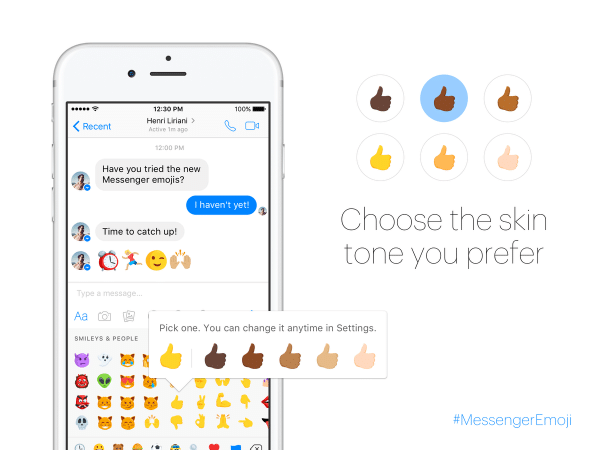 Say Hello to the World of Emojis! Facebook Messenger just launched more newer and interesting Emoji to the Instant Messaging Application to make their users chat more faster and smarter!

In other words, it means your days of seeing black boxes when you use your Android emoji keyboard are behind the box. The Facebook Emoji is now available to use and chat with in the latest Facebook Messenger App! It looks like the company can’t put a foot wrong and the new development comes just after it introduced emoticons as part of its ‘Like’. The Facebook Emoji is especially for their Instant Messenger and can be invariable used on their Facebook website.

According to Facebook, 10% of all messages sent via Messenger include emoji, and considering how many messages are likely sent on the service, that’s a crap ton of emoji and arriving with more than 1,500 newly designed emoji to public, including gender-agnostic options and multi-colored emojis. For multi-colored emoji users, they will get to determine the skin tone they prefer, including dark, pale, or The Simpson’s yellow.

ONE EMOJI STANDARD FOR THE MESSENGER WORLD: Messenger is addressing emoji woes by rolling out a new set of standardized emojis so you can be sure you’re sending the right message. No matter what emoji you pick, it will now look the same for all Messenger users, regardless if the recipient is on Android, iOS or another platform. In other words, no more broken-looking black boxes or emojis that just don’t make sense. Our characters are consistent every time you use them, no matter what platform the recipient is on.

Also Read:- Best Emoji Ever – Download the Naija Emoji on your Android

*. Firstly, open Facebook Messenger App on your iPhone, iPad or Android device
*. Then at the bottom of the app, tap on the “Me” tab
*. Tap on the Photos and Media option
*. Toggle the Messenger emoji button to the off position
*. Your emoticon and emoji sent will return to your device’s standard set

Facebook isn’t the first to push the emoji horde into more diverse territory. You can already choose different skin tones on Apple’s iOS and Google’s Android. With the next version of Android, for now known just as N, you’ll also be able to choose more depictions of working women.