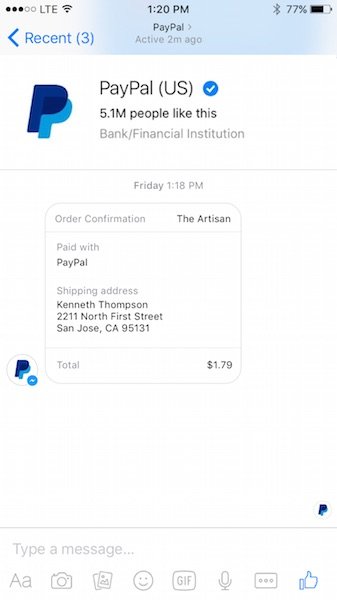 Finally, after several rumors that the Big Social Chatting platform “Facebook Messenger” will be supporting PayPal transactions sooner or later, finally, it can now conduct the transaction successfully.

Although, something triggered the idea of them adding Paypal. At first, Facebook Messenger was using debit card but then, after the news that Paypal is owning the big popular transaction app Venmo, they were left with no choice than to add Paypal.

Meanwhile, the idea of adding Paypal transaction is not only the new feature, they also added another feature that will let you receive notifications about recent PayPal transactions. This is amazing right. Take a look below;

And really, Facebook has slowly but surely been turning Messenger into a full-fledged business of its own, and the ability to send and receive transactions was just one small part of that process. PayPal is just another option on the table.

According to the report, the new PayPal transactions are beginning to roll out in the US others today; and we definitely have no word on when it’s arriving in other countries. Stay Updated!