Facebook Research has reportedly been live since 2016, and this time around, they were reported paying teens and adult some few cash to take their data.

To accomplish this tool and make it a reality, Facebook are using third-party app testing platforms. Addition to that, the app seeks root-level access to track user activities.

Facebook Research is a VPN app used for this intention, and the company are installing the app automatically on people’s phones. It tracks their phone and Web activities.

Well, it is not just affecting only Android fanboys, but iOS iPhone users are also included. Facebook installs this app on people’s phone.

Facebook is reportedly paying $20 gift cards (N7500) to both teenagers, and adults who accepts the installation of the application. Tipped by California-based company, the Menlo Park. 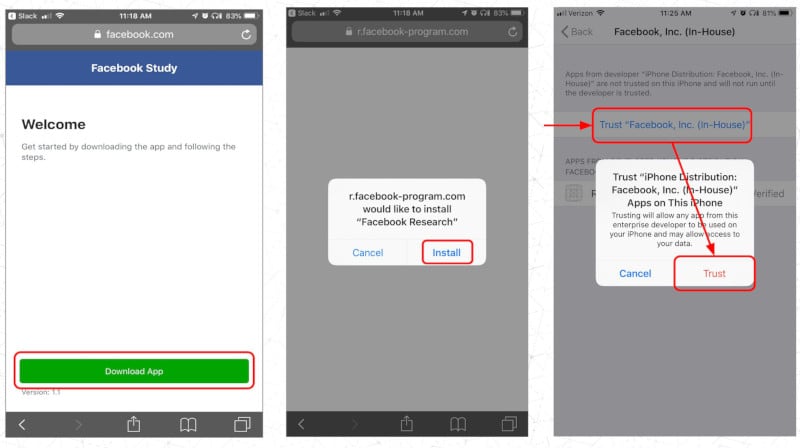 According to the Techcrunch, Facebook Research seems to be a successor to company’s Onavo Protect VPN service that it had acquired back in 2013. The social giant had to remove Onavo Protect from Apple’s App Store over privacy concerns in August last year.

Since 2016, it has been distributed, and the company is said to be running advertisements on Instagram and Snapchat offering people (aged 13-35) cash for participating in a social media research. The signup pages for the program don’t mention Facebook.

“If Facebook makes full use of the level of access they are given by asking users to install the Certificate, they will have the ability to continuously collect the following types of data: private messages in social media apps, chats from in instant messaging apps – including photos/videos sent to others, emails, Web searches, Web browsing activity, and even ongoing location information by tapping into the feeds of any location tracking apps you may have installed,” a security expert told TechCrunch.