Facebook is testing out a new feature that gives group admins the fundamental rights to charge their users for contents being displayed on the group platform. Facebook group admin can charge from $4.99 to $29.99 a month for premium membership. Why not start from $0.99/months, few users says!

But this is really kind of confusing and is already bringing in different controversies and huge competition! Facebook is giving groups the ability to charge subscription fees for access.

Facebook will start from parenting, cooking, and home cleaning groups but certainly, car, gaming, SEO, and many other popular alike groups will get a higher pricing!

Anyways, two groups have already begin the trend; My Home group costs $14.99 a month to join and Grown and Flown Parents group costs $29.99 for access to college counselors, it is a College Admissions group.

At first, Facebook groups has always remained free and the users most times join and leaves group within a short period of time but the new feature will definitely, make the users feel unique and provide a special belonging.

But along with the special belonging, adding a subscription or pay-to-see options might in other way, push and drive people away from groups. But driving people away depends solely on Facebook group administrators only! 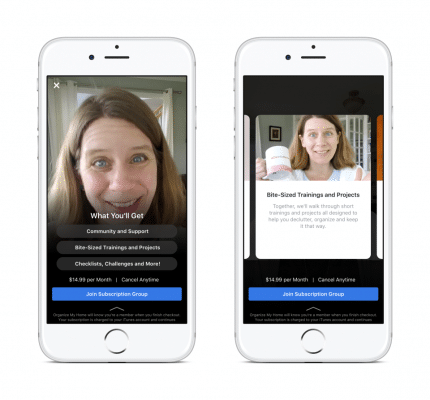 Wondering why? It is simple. Lets take for instance, 2 groups shares palatable cooking recipes and ingredient from all different countries, group A fixes a subscription fee of $20 per month and group B fixes $10 per month and they share almost the same recipes, we know our choice!

As a start, free groups will remain intact, but they will soon have the option to launch premium sub-groups. Facebook says the new feature is really worth the time as group admins put a lot of time to growing their communities.

In order to pay off, they can now earn money at the same time. The company also says admins could take the money they earn to create higher-quality content for the group as well, whether that be more posts, videos, or offline meet-ups and events.

Well, I really don’t see why group admin will fix a huge pricey subscription fee for their contents, after all, it has always been free for a longer time. Adding in-expensive and economically lesser amount would be appreciable.

Thankfully, Facebook won’t be taking a cut of the revenue during the trial but Apple and Google will be taking a percentage of user subscriptions fees via iOS and Android.

Meanwhile, few group admins might incorporate the pay-by-will options. Facebook isn’t charging, they are giving group admins the options to charge people themselves.