New updates rolls out on Facebook and their are exclusively wonderful and awesome. Today, you can now conduct your own 360 livestreaming and also ask friends for charitable donations, hilarious.

Facebook now allows anyone to stream 360 videos to their Page or Profile, provided they have the right camera. So be prepared because your News feed might be filled up with a lot of 360 live streaming videos.

If you can recall, the Facebook 360 was launched last year but then, it was only for selected persons and group and right now, Facebook are intending to look more and add more features to it by giving everyone the opportunity to enjoy the live streaming.

Facebook is also supporting spatial audio for 360 broadcasts. This audio format allows listeners to hear the broadcast in 360 — in other words, as they would if they were actually there.

Currently there are no cameras that support spatial audio for Live 360 natively, but Facebook says ambisonic microphones will work.

Right now, there some cameras that can allow you to see all reactions and comments to your livestream within the interface. There are several cameras that support this, including the latest Samsung Gear 360, Insta360, and professional cameras like the Nokia Ozo.

Planning on doing something quite amazing? Then ask your friends for Funds, right now. Facebook just added a ‘personal fundraiser’ feature today, taking on services like GoFundMe head on. The new tool will allow people to leverage their friend networks to collect charitable donations for emergencies and other important issues. 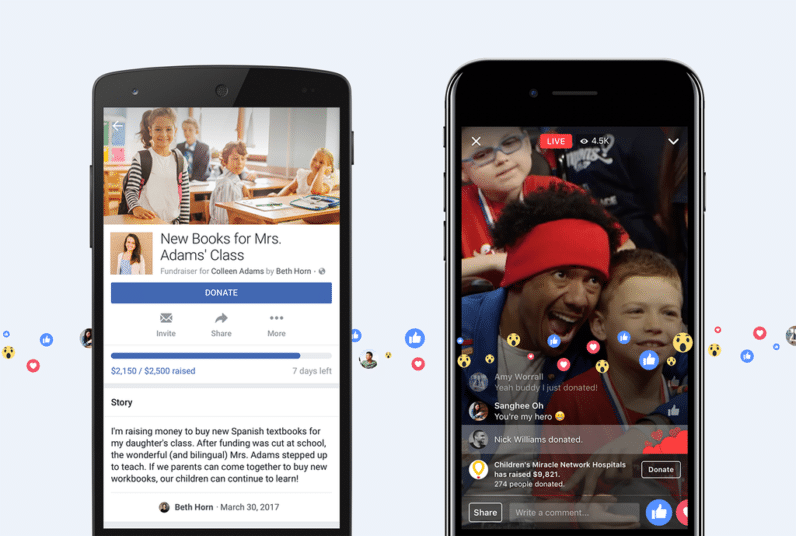 You may recall that Facebook previously added a fundraising feature back in 2015, but this only applied to non-profits. The new feature lets almost anyone start a fundraiser (if they live in the US). However, you can’t go around asking your friends for money to buy some diamond-studded taco or whatever you found on eBay just yet. Facebook is limiting you to just six actually-important categories:

Emergency causes and education expenses make sense to start with because those are things that are genuinely worth investing in. Anyways, let see how things are going to turn up for this.