There is Bad News and There is Good News!

It is very unfortunate that it has to come to this! After the intervention of the CBN, NCC twice as the normal to save the crashing fellow out of the billions loan since 2015!

Things changed and things never remained the same! It is quite unfortunate. Etisalat International has announced that it’s severing ties with its Nigerian arm and will give Etisalat Nigeria 3 weeks to stop using the brand name.

However, they have successfully announced a new CEO – Boye Olusanya – Etisalat has terminated its management agreement with its Nigerian arm and has given Etisalat Nigeria three weeks to phase out the brand in the country.

According to the chief executive of Etisalat International, Hatem Dowidar:

“There’s a new board and we are not part of that company. We have sent our termination letter for the management agreement,” he told Reuters.

“The train has left the station on that one. Being in that market as an investor … Are we willing to risk more money compared to the reward for the long-term?

There are some few rumor going round that Glo, Vodafone or Orange might take over Etisalat’s place, take this as a pinch of salt, alright?

But see this: It depends on the new appointed CEO on whether, if she will change her name to something else but the fact there is that, they can continue using the Etisalat Name, giving more hope on the security of her millions subscribers.

“Emerging Markets Telecommunication Services Ltd. (EMTS), trading as Etisalat Nigeria, said it is aware of reports regarding Etisalat Group’s withdrawal of the right to the continued use of the Etisalat brand in Nigeria by EMTS.

However, EMTS had a valid and subsisting agreement with the Etisalat Group, which entitles EMTS to use the Etisalat brand, notwithstanding the recent changes within the company.”

Etisalat Get 10x of your Recharge

Well, this new offer on Etisalat Nigeria is a special offer for all new and existing customers on the Etisalat network. The offer gives you up to 10x your recharge daily for 30 days. 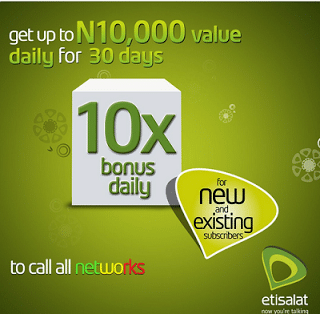 You don’t need to get a new sim card or go a long process, all you have to do is to Dial *819*1# to enjoy! Meanwhile, new customers, get 10 times the value of your recharge daily for voice calls and data to all networks in the first month and then get 7times the value of their recharge in the second and third month.

While existing customers, get 7 times the value of your first recharge daily for voice calls only to all networks for 30days. It is go-go situation!