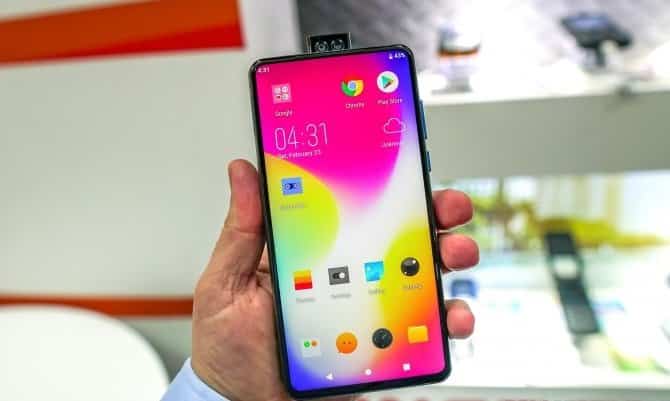 This is the Energizer Power Max P18K Pop Smartphone that is huge, chunky and comes with a massive 18,000mAh battery capacity, just one of the many phones unveiled during the MWC 2019.

Mobile World Congress 2019 brings all the latest technology from all around the world, and mobile phone with 18,000mAh battery capacity is just one of those crazy stuffs.

The Energizer Power Max P18K Pop looks like a battery itself, but with a phone built straight into it. Because, it doesn’t look like the other way around.

France’s Avenir Telecom has licenses to the Energizer brand, and like HMD Global to the Nokia phone brand. The both companies has done incredible stuffs.

The France’s Avenir Telecom is actually responsible for making the most of it devices that push the normal and regular boundaries of specs and features.

The new device is a notch-less mobile phone that arrives with a 6.2-inch LCD display, with smaller and minimal bezels surrounding the screen. Anyways, there is a chin at the bottom.

And the design looks amazing, with shiny colors option. There is a dark blue unit, which measures in at 18mm of thickness, according to Avenir’s spec sheet.

You might be wondering about the front camera for selfie, as there is no notch to house one at the front display screen.

Instead of any type of notch display, the phone comes with a pop-up mechanism, which houses two camera lens, which acts as selfie shooters.

At the back sits a triple camera lens, which isn’t bad for a battery phone. And it is powered by a MediaTek Helio P70 chipset processor.

Coupled with 6GB of RAM, and 128GB of storage. It runs on Android 9 OS out of the box. With the new Energizer Power Max P18K Pop Smartphone with 18,000mAh battery.

It comes with fast charging tech, which can power-up a Smartphone under 8-hours. And the company promises a longer time, and a week’s worth of use, or two full days, 48 hours, of continuous video playback.

The company also announced the Energizer Ultimate U620S Pop, which is much more slimmer than the chunky phone, But comes with the same pop-up cameras spec, RAM, storage and processor.

In summary, the Energizer Power Max P18K Pop is the biggest battery in the world. And will officially launch during the Summer period.