Yea, this questions has got a lot of people talking and shouting on Facebook. But most times, after looking at this case, I find it so disturbing because the Facebook-Owner Mark Zuckerberg was also Included!

Maybe, Facebook wanted to show some sympathy for those that was lost and have not been found but Mark wasn’t lost? Why then. This Facebook Bug wanted so many dead, millions of people dead!

Despite being very much alive, Facebook users, when logged on to their accounts on Friday afternoon, found their accounts turned to a “memorialized account,” strongly suggesting that they are dead to everyone who visits their profile. 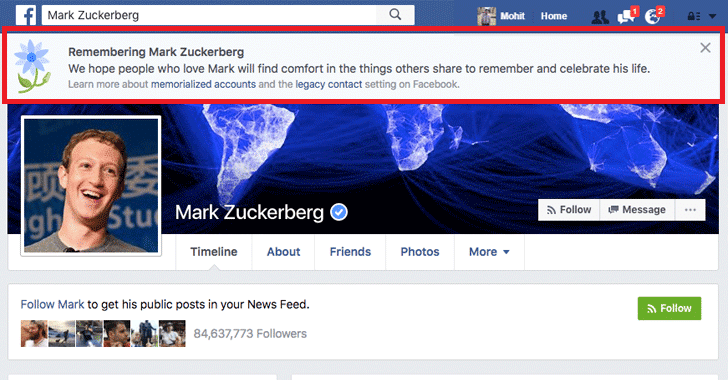 “We hope people who love Mark will find comfort in the things others share to remember and celebrate his life.”

When the message appeared, thousands of users shaken by the incident complained on Twitter about their premature digital deaths, offering their proof-of-life so that their concerned relatives could calm themselves down.

Facebook introduced the memorial feature in 2015 after a number of high-profile cases where families wanted to access their loved ones’ social accounts.

The users can opt to have their account completely delete after their death or turn into a memorial page so that their Facebook friends and families can leave messages and share memories on their profile.

Well, did you received this Notification on Friday, 11th? If yes, then try to make use of the comment box. And please do share.