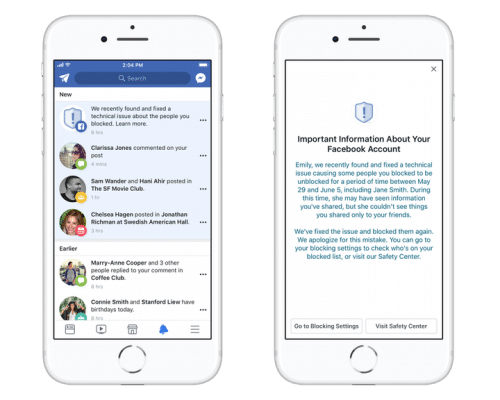 Everything happened under a week

Facebook might be one of the biggest Social media platform, where you can meet new people, make friends, do business, create conversations and many others, it offers more advantages but at the same time, it is vulnerable!

One of the many best features of Facebook platform is the blocking lists, and it is used for many reasons, for instance, their relationship may have changed or they may want to take a break from someone posting content they find annoying. Other reasons are more serious like harassment or bullying.

The Facebook bug has been active since May 29th – June 5th, Erin Egan, the company’s chief privacy officer confirmed! That is one reason, why you should go and check your Facebook block lists!

But thankfully, the bug did not re-establish friend connections between any of the affected users and the blocked individuals, Egan says, and blocked users may have been able to re-send friend requests if they happened to notice they were suddenly unblocked.

They also explained that 83% of people affected by the bug had only one person they had blocked temporarily unblocked, and someone who was unblocked might have been able to contact people on Messenger who had blocked them.

“This issue has now been fixed and everyone has been blocked again. People who were affected will get a notification on Facebook encouraging them to check their blocked list,” Egan writes.