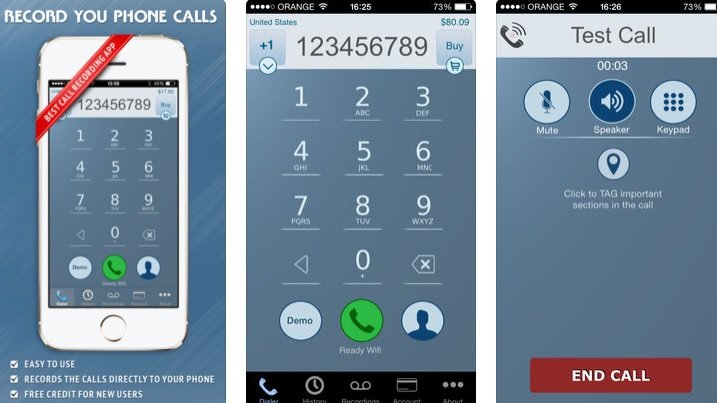 If you are using iPhone Smartphone, then you should know by now that there is no inbuilt call recording feature. There’s no built-in way to record phone calls using your iPhone.

This is totally unlike Android Smartphones, and most of the featured mobile phones are available outside there. Apple just made it difficult to records calls.

But call recording on iPhone is now a thing of the past, whereby, all thanks to the series of Apple’s iOS iPhone app, which allows you to easily record your calls.

In order for the below apps to record your calls, then it must make a VoIP call from their server to the recipient, patch the call to your phone, while recording the conversation in between.

Did you get the theory? In essence, the below outlined iOS apps can technically stores your conversation. But most of them mentioned that they don’t do that for security reason.

Another important note is that most of the below iOS apps support number forwarding. That means, your actual number will flash on the caller ID of the recipient, and not some random number. You can also choose to hide your number if you like.

Fortunately, the WeTalk pro is an iOS app that allows you to record calls on your iPhone. But it has a downside, which isn’t actually one.

Before you can use WeTalk Pro to record calls, you need to manually hit the “Record” button, as the app doesn’t record all calls by default.

Another serious issue is the numerous annoying pop-ups related problems with the app. Normally, WeTalk Pro is and International calls App.

Where you can make free calls & free texting between WeTalk users. You can checkout the iOS app on itunes HERE. Here are the features of the app on itunes:

And there is the Callbacker iOS app, which intensively records phone calls on your iPhone handset. Well, you really don’t have to be afraid, because it has got amazing reviews online.

The Callbacker iOS app also allows you to make and receive international phone calls with crystal clear voice quality, and they claim to be more cheaper than Skype.

The Callbacker app features phone call recorder and caller ID display, this feature will automatically let the receiver see your phone number. You can checkout the app on itunes HERE. Other features of the app includes:

Just like the name implies, the iOS app allows you to make calls, and record it. After all, it is no much different from other iOS app that works the same feature.

In order for the record me, record you feature not to work, this Call Recorder app states that they don’t save your conversations on their servers.

They made it clear that the file is temporarily saved on their server, but only until it’s downloaded to your phone. And thankfully, it works perfectly.

When you launch the Call Recorder iOS app, you will see the dialer, the first thing you see is a dialer, where country codes can be easily searched for, and balance credits in your account are shown up front.

This services aren’t cheap, but Call Recorder is offering you to buy credits of $5, $10, $19 and $50. The app shows you call history, all your recordings, and account status.

However, all the recorded audio files can be transferred via the many apps supported in the share sheet. And the app records calls with good clarity.

They claim to be the best call recorder app, all thanks to its 11 million+ installations around the world. You can checkout the iOS app HERE on itunes. Below contains other feature:

*. You can use Call Recorder to make and record national or international calls.
*. The entire call is recorded and saved on your phone.
*. Your recorded calls can be:
*. Played on the phone.
*. Sent via email.
*. Transferred to your computer with iTunes File Sharing.
*. Exported to DropBox, Google Drive and more.
*. Shared with WhatsApp.
*. You can also set a title for each recording.

As already explained, the call recording apps for iOS iPhone, are just simple paid apps that are known as Call Recorder. That allows you to record your telephone calls.

There are few of them out there on itunes, Apple’s app store, but they’ve got series of backlash, and quite handful of reviews and rating, which is always seen as “Worst app every”

If you are still interested, there is the Call Recorder – CallRecorder +, Textfun etc. You can head to itunes and try it out for yourself.