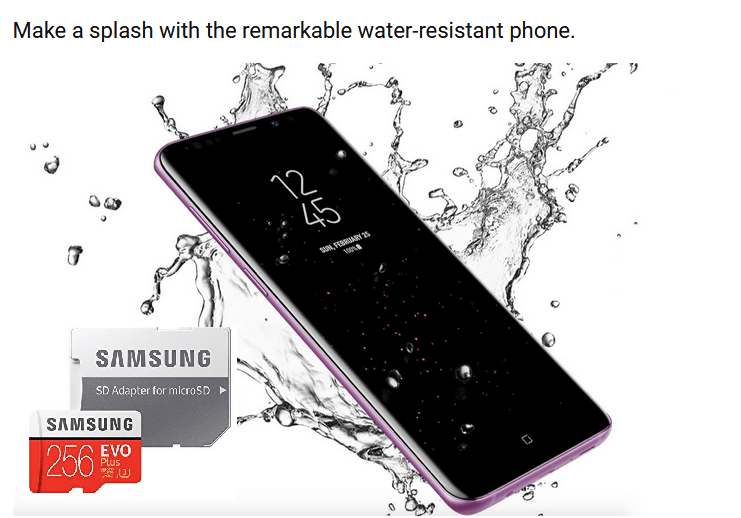 South Korean Giant Smartphone producers, Samsung Mobile has been one of the best phone makers of all time. In 2018, Samsung recently introduced Galaxy S9 and Galaxy S9 plus!

Since then, things has been more of importance to every users, as one cannot only depend on the internal memory size but with the help of the expandable micro SD CARD, you can save as more photos, movies, videos, applications, games as you may like.

Amazingly, Samsung Galaxy S9 arrives with some cool specs, amazing Infinity displays screen size that helps you to hold less and see more with its 18:5:9 screen ratio, impressive camera that lets you see what you were actually looking at and its AR (Augmented Reality) which turns you into an emoji.

One of the best reason why this article was created is because, out there, we have various types of Micro SD cards and of course, they all differs from each other, ranging from higher better performance to lower performance, original versions to counterfeit versions.

And before getting any of the Micro SD card, you have to look for the best company. Which includes Samsung, SanDisk or Kingston. Samsung Galaxy S9 records a ton 4K video, even at 30fps. And there is also plenty of room for shooting some super slow-motion videos at 960fps. The SanDisk Ultra lineup does sport read speeds of 100MB/s and write speeds of 90MB/s.

And also, before getting one, look for a Micro Sd card that can read and write speeds as the SanDisk Ultra model, 100MB/s and 90MB/s respectively, but they are optimized for recording video, such as Samsung’s EVO Plus series.

Below are some top picks for the best Micro SD CARD for Samsung Galaxy S9 and as pointed out by Sammobile, the Galaxy S9 and S9+ will support 400 GB microSD cards! This is incredibly one of the best storage ever!

Although, it arrives with 64GB internal memory storage but with the 400GB microSD cards, you can do more and save more, support 960 fps slow-motion videos. The prices ranges from $20 – $150.

This is one of the best Memory card as it can supports transfer speed up to 100MB/s & 90MB/s read & write speeds respectively. With high-performance for 4K UHD video recording, high resolution pictures, mobile gaming and music, for use in Smartphones, Drones, Android Tablets, Tablet PCs, Action Cameras, DSLRs and more.

The Samsung 256GB EVO Select comes with full-Size adapter for use in Cameras and Laptop/Desktop Computers. Comes with a 10-year limited warranty. Samsung’s microSD 256GB EVO Select has added memory capacity and multi-device functionality so you can focus on life, not technology. Costs $119.99.

Sandisk’s high-performance, stylish and secure memory cards ensure that every shot you take is captured and kept safe and secure. This is Sandisk Ultra cards offer greater capacity and higher transfer speeds, making them excellent for video recording and playback in Full HD.

It comes with a transfer speeds of up to 100MB/s and it is rated A1 for faster app performance and UHS Speed Class U1 and Speed Class 10 for Full HD video recording and playback. It also features shockproof, temperature-proof, waterproof, and X-ray-proof. Costs $62.99.

You can store more with the new Samsung 256GB Evo Plus and the transfer speed is equivalent bigger. This UHS-1, U3 Class 10 compatible memory card is perfect for capturing photos and for video recording playback in Full HD. And with read write speeds of up to 95MB/s and 90MB/s respectively, apps and videos load quicker and files transfer faster.

On the Samsung 256GB Evo Plus, you can shoot rich and detailed Full HD videos on your smartphone, tablet, or camera and be confident that each memory will be safe. Play your videos back on your Full HD TV or monitor. Costs $137.57.

On your Galaxy Smartphone, you can save and record higher video capacity, save bigger files, musics etc and it also comes with a 10-year limited warranty. Costs up to; $19.99.

This is the sports 100MB/s read speeds and 90MB/s write speeds, which is going to be plenty for recording 4K and super slow-motion video, has A1 support, which makes it great for saving apps and games to the micro SD card.

And it also built for the high rugged situations, it is being tested in harsh conditions; temperature proof, water proof, shockproof, and x-ray proof. Costs $193.12.

In conclusion; These are the best Micro SD card expansion for your Galaxy S9 Smartphone. With the above SD card, you can transfer at a higher speed and they all can record 4K videos, most of them are rugged Micro SD cards, which can withstand shock, water, dust and you can get them at Amazon, Gearbest.