ASUS at its online event announced two flagship phones – ASUS ZenFone 8 and ZenFone 8 Flip smartphones with its screens protected by a Corning Gorilla Glass Victus and are powered by Snapdragon 888 SoC with 5G SA/NSA.

With the introductions of these Smartphones, ASUS is planning on boasting some incredible competition in the Smartphone industry, and these flagship devices are similarly identical to each other in some cases.

ASUS Zenfone 8 might just come as a normal flagship mobile handset, but the Zenfone 8 flip name says it all, which indicates that the flip version comes with a flip camera that can take either take back / selfie camera shots.

While most of the specifications are quite identical to each other, the only major feature of the Zenfone 8 Flip is its flip-up camera that allows you to use the rear camera that is protected by Gorilla Glass 3 to take selfies.

These cameras include a triple-lens setup, a primary f/1.8 64-megapixels Sony IMX686 sensor that lacks OIS, but it can record 8K video at 30 fps as well as 4K at 60 fps, plus HyperSteady video.

While the 12-megapixels Sony IMX363 sensor is a 113 ultra-wide camera that is also capable of taking macro shots and tops out at 4K/60fps. While the 8-megapixels telephoto camera with 3x optical and up to 12x digital zoom.

The Zenfone 8 Flip has a new powerful stepper motor that can shoot photos and videos while it is in motion. It comes with stereo speakers with dedicated NXP mono amps (TFA9874) and a Hi-Res Audio certification tuned by Dirac Research. 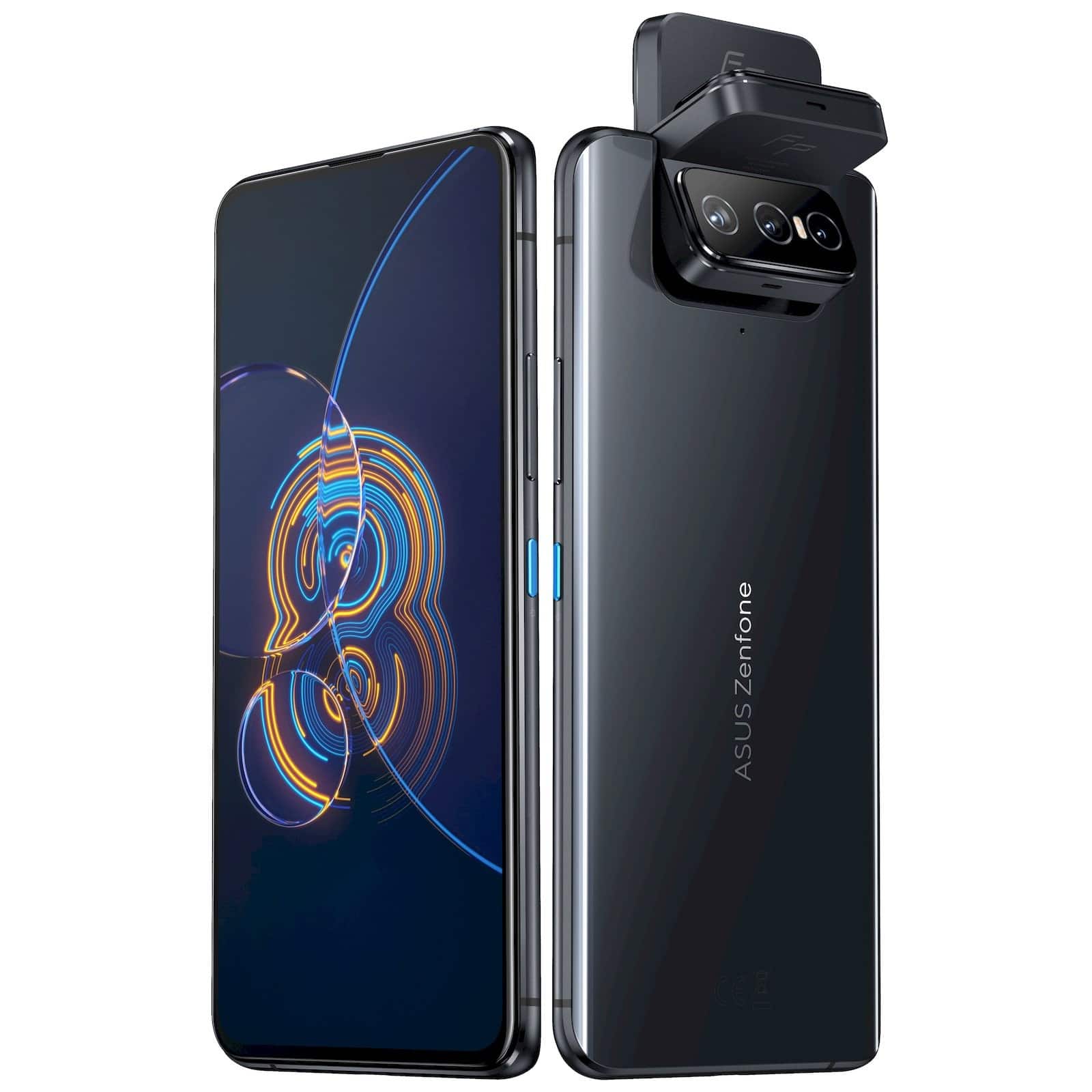 As you may have guessed, the idea about the flipping camera to make the screen a faultless-notchless and blemish-free display. It comes with an in-display fingerprint sensor, 9.6mm thick, and weighs 230g.

The Zenfone 8 Flip arrives with a dual-layer optical coating with a glossy finish and comes in Galactic Black and Glacial Silver color options. It runs on Android 11 OS with ZenUI 8 out of the box.

It still sports the Smart Key tho, which can trigger three custom actions with a single, double, or long press. And comes with a 5000mAh battery with 30W HyperCharge with QuickCharge 4.0 and USB-PD support.

The wireless connectivity includes Wi-Fi 6E support, there is the aptX Adaptive for audio, Dual 4G VoLTE, Bluetooth 5.2, and NFC support. The ASUS Zenfone 8 Flip 256GB model costs 799 Euros ($965) and will roll out in Europe soon. 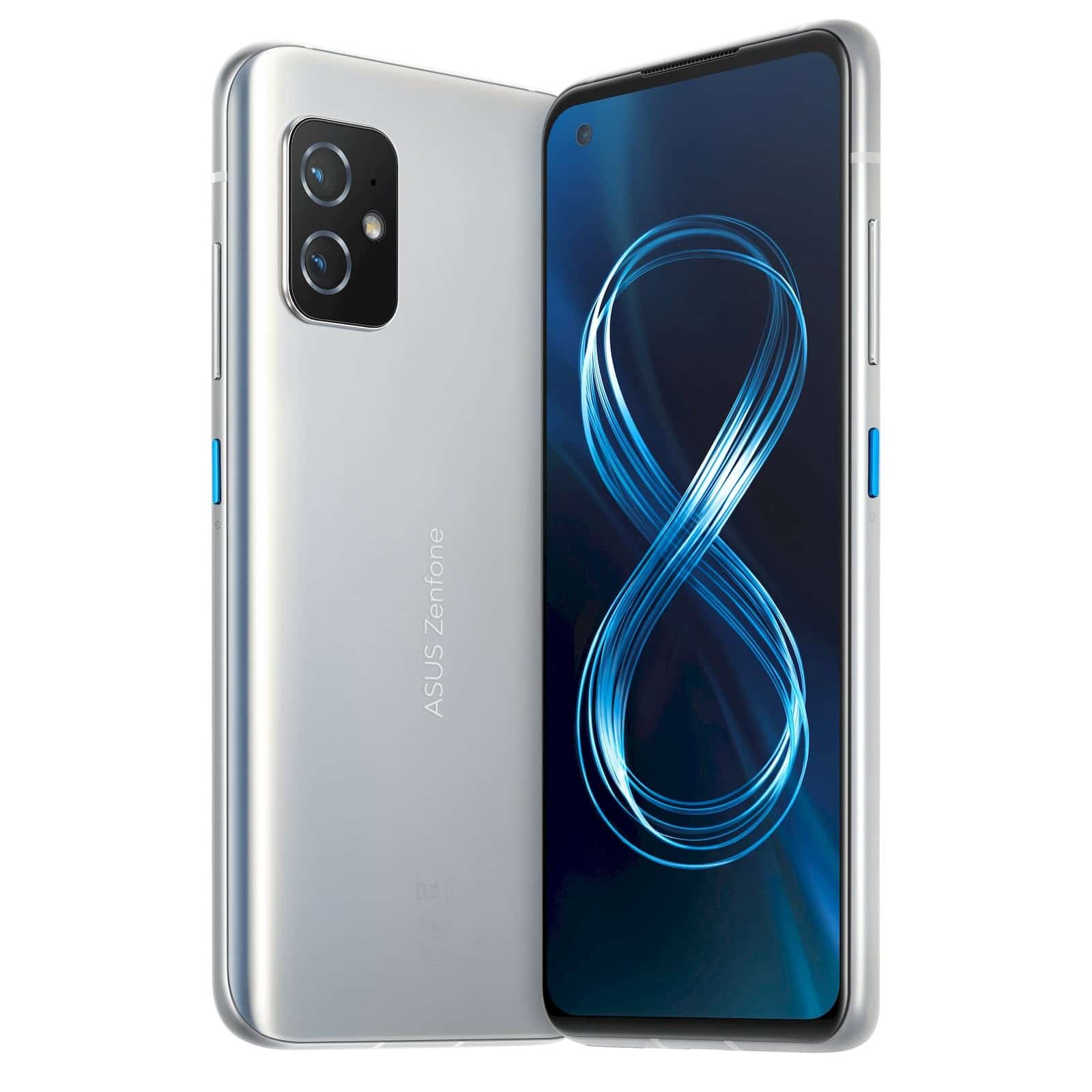 The Zenfone 8 sports a 5.9-inch Samsung’s E4 AMOLED screen with 1080 pixels resolution. It is HDR10+ certified, with a 20:9 aspect ratio display, and comes with support for 120Hz refresh rate and 240Hz touch sampling rate.

Tops at 800nit with up to 1100 nits brightness, 112% DCI-P3 Color Gamut, and similar to the Flip, it features Corning Gorilla Glass Victus Protection, 8.9mm thick and weighs 169g. Making it smaller than the Xperia 5 III.

It is also the company’s first Smartphone with an IP rating, featuring IP68 dust and water resistance rating. It features an in-display fingerprint scanner and comes in Obsidian Black and Horizon Silver color options.

Well, there are back cameral and a selfie shooter. On the Zenfone 8 frosted glass back panel are a similar sensor to Zenfone 7 generation, an f/1.8 64-megapixels camera with Sony IMX686 sensor, and 0.8μm pixel size.

It comes with support for Optical Image Stabilization (OIS), can record 8K video at 24fps (with EIS enabled). There are 4K/60 fps and 1080p/60 fps with HyperSteady and triple mic system features OZO Audio Zoom and Noise reduction.

Both the ultrawide and the selfie cameras can record 4K video at 60fps and 30fps, respectively. Fortunately, there is 5G SA/NSA, Dual 4G VoLTE, Wi-Fi 802.11ax 6E, Bluetooth 5.2, GPS/GLONASS/Beidou, and NFC support.

It comes with an FM radio receiver and two linear speakers with dual Cirrus Logic mono amps (CS35L45) and Dirac HD Sound support. There is the Audio Wizard app will let you tinker with the equalizer.