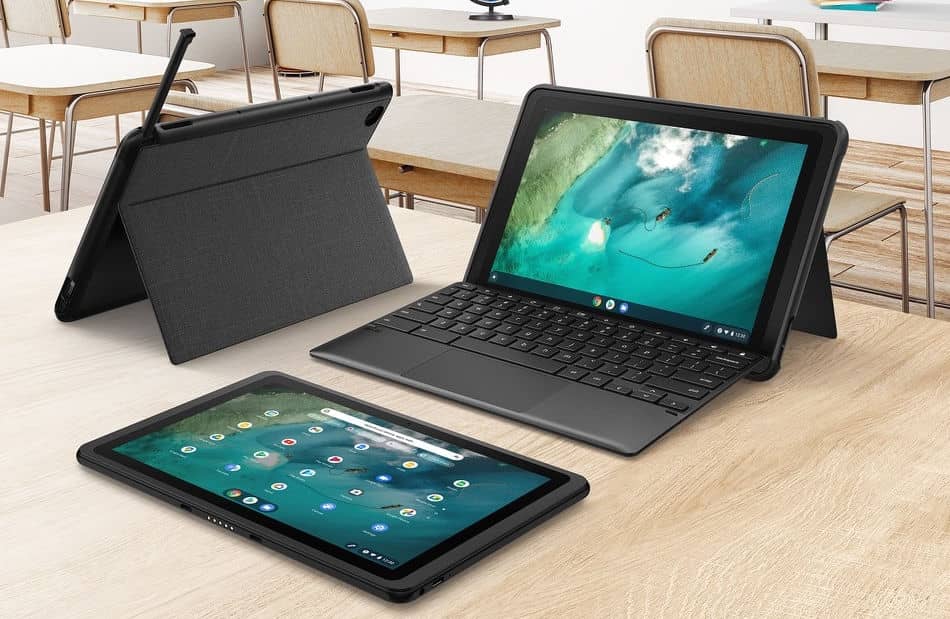 ASUS Chromebook Detachable CZ1 (CZ1000) officially announced with a 10.1-inch FHD touch screen, powered by MediaTek Kompanio 500 and it offers up to 11 hours of battery life on a single charge.

Well, if you are looking for a hard-core Chromebook, offering all-around anti-collision rubber strips, then your pick should be the Chromebook Detachable CZ1 (CZ1000). And it sports MIL-STD-810H US military regulations and can withstand shocks and drops.

On the front is a 10.1″ 1920×1200 pixels glossy LCD touch screen with a 16:10 aspect ratio, 100% sRGB color gamut and boasts up to 400nits brightness. It sports TÜV Rheinland Eye Care certification that increases eye protection. It is available only in the Black color.

The ASUS’s new Chromebook was announced alongside a full-size keyboard with a soft keyboard featuring a 1.5mm key travel that can be detached, and similar to other Chromebooks out there, it features a stylus pen that can be housed in the slot.

ASUS’s new Chromebook Detachable CZ1 is powered with up to 2GHz MediaTek Kompanio 500 (8183) processor coupled with Arm Mali-G72 MP3 GPU for better graphic performance and it runs Chrome OS. There is a 2-megapixels front camera and 8-megapixels rear camera

It is available in a single memory configuration, 4GB LPDDR4X RAM in either 64GB / 128GB (eMMC 5.1) storage, and comes with support for memory expansion. It features a 27Wh 2-cell Li-ion battery, which the company says supports 11 hours of battery life, and comes with a 45W AC adapter.