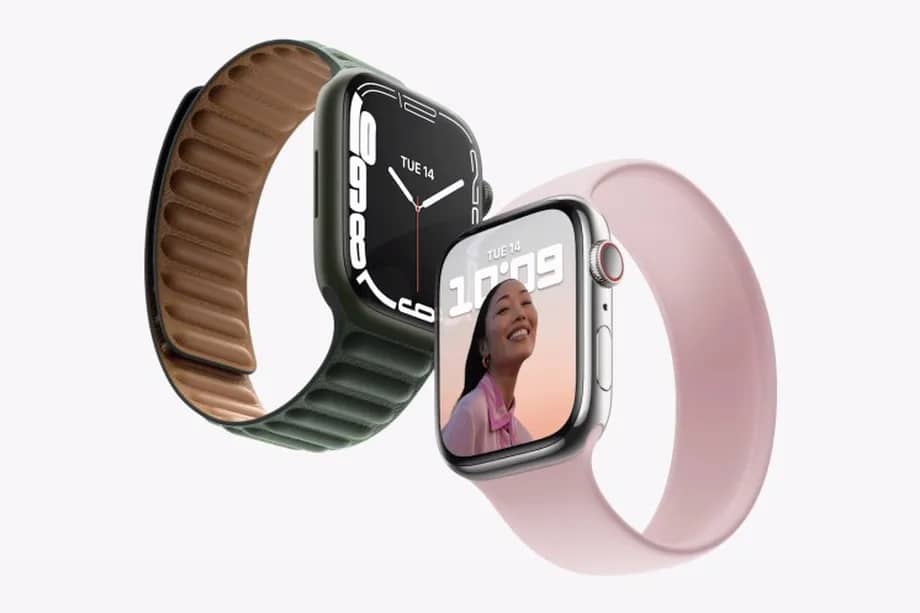 During the Apple California Streaming launch event, Apple also announced the Watch Series 7 with an impressive overhaul design, there are curved sides, softer rounded corners, and a glass cover. Overall, the Apple Watch Series 7 just got a unique brand-new look.

The Watch Series 7 comes with a larger Always-on Retina Display that has nearly 20% more screen area and thinner borders at just 1.7 mm, and it is 40% smaller compared to the Watch Series 6, Apple claimed.

It is available in two different options – 41mm and 45mm sizes. Apple added an extra 1mm than the Series 6. When it comes to durability, the Watch Series 7’s glass cover is now more crack-resistant, with IP6X dust-protection rating in addition to the WR50 water resistance.

The Watch 7 series comes with special two unique watch faces that are specifically designed for the device – Contour and Modular Duo. There is a new user interface optimized for the larger display, it can now show more text notifications and the Apple Watch and it also offers greater readability and ease of use.

Alongside the two additional larger font sizes, there is the Watch Series 7 with a full QWERTY keyboard for answering texts. You’ll be able to tap or slide with the Apple QuickPath — which uses machine learning to predict what you’re trying to type.

WatchOS 8 comes with a new Mindfulness app, innovative accessibility features, greater access with Apple Wallet, and more capabilities with the Home app, along with enhancements to Messages and the Photos app.

The new WatchOS 8 also adds some new features, outdoor cycling will now have better support and should automatically pause the workout when you stop at a light or just to catch a break.

While the Fall support will also appear in workouts, where injury such as wrecking of your bike or trip up badly during a workout, the Watch will be able to contact emergency services. Which radically increases the safety of its users.

In other difference, the small Series 7 is now just 1mm smaller than the original largest Apple Watch announced back in 2014. It comes with an electrical heart sensor and ECG app, and a Blood Oxygen sensor and app.

However, when it comes to battery life, the Watch Series 7 isn’t different from its predecessor, offering up to 18 hours of battery life with a Magnetic Fast Charger USB-C Cable that charges via USB-C instead of USB-A and charges up to 33 percent faster. This is achieved thanks to the new charging architecture.

Apple also claims that eight minutes of charging will give you up to eight hours of battery life. It is just the same all-day 18-hour battery life on a single charge. Which allows 45 minutes on the charger will take the Apple Watch Series 7 from 0 to 80%.

Apple Fitness+ is also arriving with a massive service upgrade, recall that it is the first fitness service built entirely around Apple Watch back in September last year. Apple noted that Fitness plus will be expanding to 15 new countries and will also be available in English with subtitles in six languages.

Fitness Plus will introduce Group Workouts with SharePlay, later this fall, allowing users to work out with up to 32 people at once to keep each other motivated. It will also get a new body-conditioning workout type with Pilates, starting from September 27th.

You can easily practice mindfulness anywhere, anytime, with guided Meditation, and will also include a new program called Workouts to Get Ready for Snow Season.

The Apple Watch Series 7 aluminum variation comes in five colors – black, gold, blue, and red, plus a dark green that’s in sync with the rugged new support. The Watch Series 7 is launching this Fall and it starts at $399 (NGN164,177 Nigerian Naira).