While Android fanboys are still waiting for the 2018 Operating System from Google, Apple iOS 11.3 has been launched ahead of the Android 9.0 (P). All Apple products will soon start getting newer interface look.

Early this year, Apple inc were filed for personally slowing down their devices with older / aged batteries without any proper information to the users and many Apple fans decided to switch from iOS to Android OS but with the new iOS 11.3, you can solely prevent Apple from slowing than your your aging iPhone.

The processor performance on older phones were slowed down by Apple, that will warrant users or customers to either change the battery or change their device when it is not yet necessary.

At first, you can on or off this intrusive feature only on iPhone 7 / 7 Plus, SE, 6S / 6S Plus, 6 / 6 Plus but now, all users with an iPhone 6 or later will see a new battery health screen that will recommend if a battery needs to be serviced.

How to disable Throttling on Apple iOS 11.3

Although, you can now replace a Apple battery from $79 to $29. Now customers can be given the option to disable all throttling no matter how old their iPhone’s battery is, here is the procedure;

On updating your Apple to iOS 11.3, you’ll notice a new page under Battery in the Settings app.
*. Tap Battery Health (Beta)
*. Under Peak performance capability; you will see Disable link, just tap it. 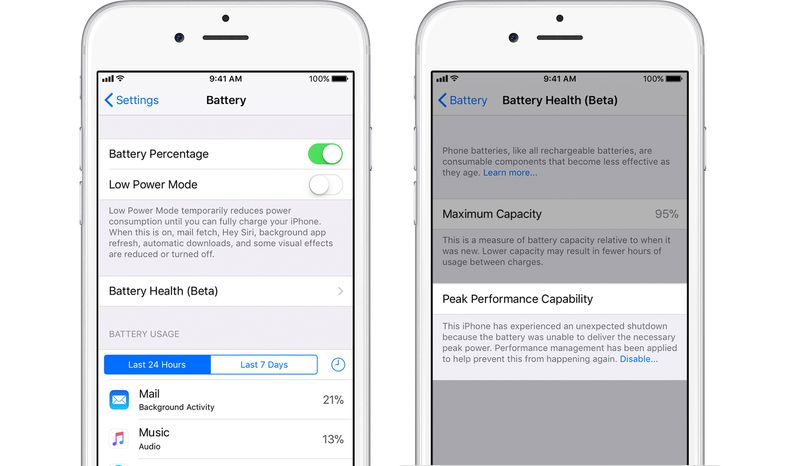 This is necessary to help your older iPhone work more faster. Apple made it so important that you can’t turn this back on until you get another unexpected shutdown, at which point it will automatically be re-enabled.

And also, this is only shown to you when your battery is faulty or has power management issues, this is determined by iOS but in a situation when your device is new or good battery life then, this screen will NOT allow you to Disable the Throttle as it will state that your phone is operating at Maximum capacity.

It might sound funny but Later on, Android phone makers esp Samsung and LG came out publicly and pleaded NOT guilty to slowing down older Android phones. The new Apple iOS 11.3 arrives with good iPhone battery management, better Animoji, ARKit alongside with many others.

And also, there is the new Animoji which includes a lion, bear, dragon and skull for iPhone X. iOS 11.3 also fixes other bugs too. Your privacy is now more secured too, when Apple is requesting your personal information, an icon with a link will appear, showing you how they will protect your data and how it will be used.

The Apple’s Smart Keyboard for the iPad that has been disconnecting, has been fixed, customer can now place reviews on product pages by most helpful, most favourable, most critical, or most recent.