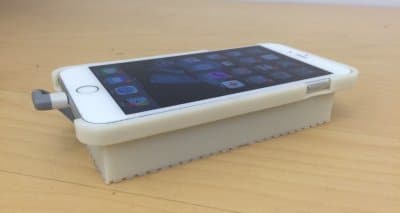 This might be a surprising new development on iPhone OS! But it is a welcoming development. According to the Tendigi Blog, who said “The holy war is over, brethren” The long awaited specification and update we have been looking for has arrived and it will be coming to you in a few days and month.

With this Android OS running on your iPhone device, you can perform all the necessary operation a full Android or iPhone device can perform. It can capture, compress, and transmit the screen’s contents in realtime at high frame rates. And another important feature about this upcoming update is that, it can also run the latest version of Android version 6.0.1 Marshmallow without breaking down.

You can do all this operation smoothly and easily without distracting or breaking down your device -all this activities with
just a Case or a board that has the size of a credit card and the height of a USB connector. The Tendigi blog did a collective work by putting Windows 95 on an Apple Watch. Watch a simple demonstration video from Lee below:-

Tendigi are a mobile design and development studio located in Brooklyn, NY. And there is openings for the SD card, HDMI and USB ports. It’s not too much thicker than the average battery case. That is to say, if you can’t choose between Apple and Android then the makers of installing windows 95 on Apple watch has made that possible.

Nick Lee, the CTO of mobile development firm Tendigi, has created a specialized iPhone case, that when connected to your iPhone, will let your iPhone run a full-fledged version of Android operating system. So, in order to run Android on iPhone, Lee first cloned the Android Open Source Project and built his own version of Android Marshmallow that he could run on a board he bought himself.

Lee then boots the Android OS on the board using a custom Tendigi app on the iPhone’s home screen. Technically, the iPhone isn’t running Android, but rather allowing the OS to share the display, but the final effect is pretty impressive, especially since the Android board can be controlled using the touchscreen display on the iPhone.