This is one of the innovation launching from the Google I/O 2016, although many are still to come but this Android Instant Apps is the latest introduced into Android ecosystem.

Google wants to bring in “The revolution of Android Phones” and trust me, there are getting it done by the minutes. Android Instant Apps don’t want the downloading and installing of apps to continue because it most times, gives headache.

According to the Android Developers Blog:- All you have to do is to tap on a URL can open right in an Android app, even if the user doesn’t have that app installed. As a developer, you won’t need to build a new, separate app.

You might be asking of there is any thing, NO, there is no new source of API’s. It’s the same Android APIs, the same project, the same source code. You’ll simply update your existing Android app to take advantage of Instant Apps functionality.

The Android Instant app features will work on Android 4.2 Jellybean and later. Maybe, bigger files might slow the phone.

The demo was done in real-time, and on an Android device running version 4.4 KitKat. Once released, it’s expected to be backwards compatible, and will run on any device running Jellybean or newer. 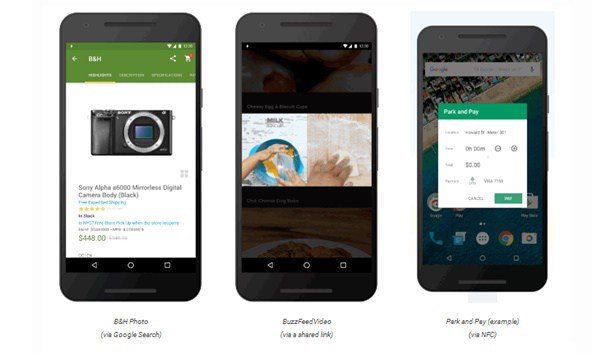 Google expects to roll out Android Instant Apps by the end of the year. After using the Instant App and you close, Note that it is gone while the Cache stays in your phone for few minutes or hour.