Update: This is the first Acer tablet to run on Chrome OS standalone 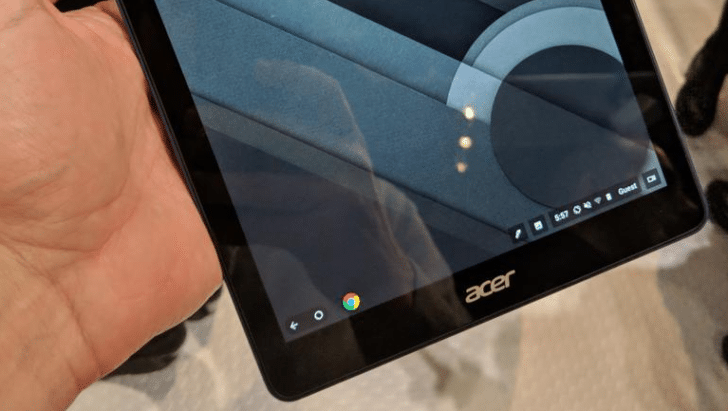 Early January, we reported that Acer will introduce new tablet that will be the first tablet to run on Chrome OS standalone and surprisingly, here is the tablet and it looks impressive from the design and interface.

Introducing to you is Acer’s Chromebook Tab 10 tablet. On first look, you would notice that the new tab arrives with a stylus support, with a small stylus built right in which is a made by Wacom meaning that, it doesn’t require a battery or any additional charging.

The latest Apple iPad is aimed at school or being a better classroom tool and that is not different from Acer Chromebook. The Tab 10 arrived a day before launching the Apple iPad, taking the lead in education standard.

The domination of Chromebook in school is way too much but with Apple’s introduction, we may see some few differences and similarities, when school begins getting more of these hardware.

The Tab 10 comes runs on OP1, a Rockchip processor integrating a dual-core Cortex A72 and quad-core Cortex A53, giving you a faster operation.

The company promises a 9 hours of battery use and The Tab 10 will also be able to run Android apps. The tablet will
sell for $329, the same with the new iPad also.

So today, we are looking at the first ever Chrome OS tablet and it looks somehow shiny. This is only photo we can get for the main time and there isn’t any specs tho.

This Acer-branded tablet was unveiled at the Bett 2018 education show in London, where all sorts of technology used to better education is showcased for all to see.

There’s a visible Acer logo on the bottom bezel. The tablet has a display of between eight inches and 10 inches and also has a Staedtler stylus.

The photo was snapped by an attendee known as Alister Payne at the Bett education and technology show in London and was spotted by ChromeUnboxed. His tweet says that the tablet hasn’t yet been officially released. The tweet has since been deleted.

There have been plenty of 2-in-1 Chromebooks that allow you to use Chrome OS in both fashions, but it looks like Acer is working on the world’s first standalone Chrome OS tablet.

He also mentions that it’s for grades 1, 2, and 3, though it’s possible that was just a reference for his school in particular. For what it’s worth, Payne hails from South Africa, where grades 1-3 are part of the “Foundation Phase.”

Google’s Chrome OS has long been the foundation of Chromebook laptops, and Google might be eyeing tablets next. Chrome Unboxed says that it’s been tracking a tablet of this sort, codenamed “Scarlet,” for about a year now, and that it’s believed to have a companion stylus from Staedtler.